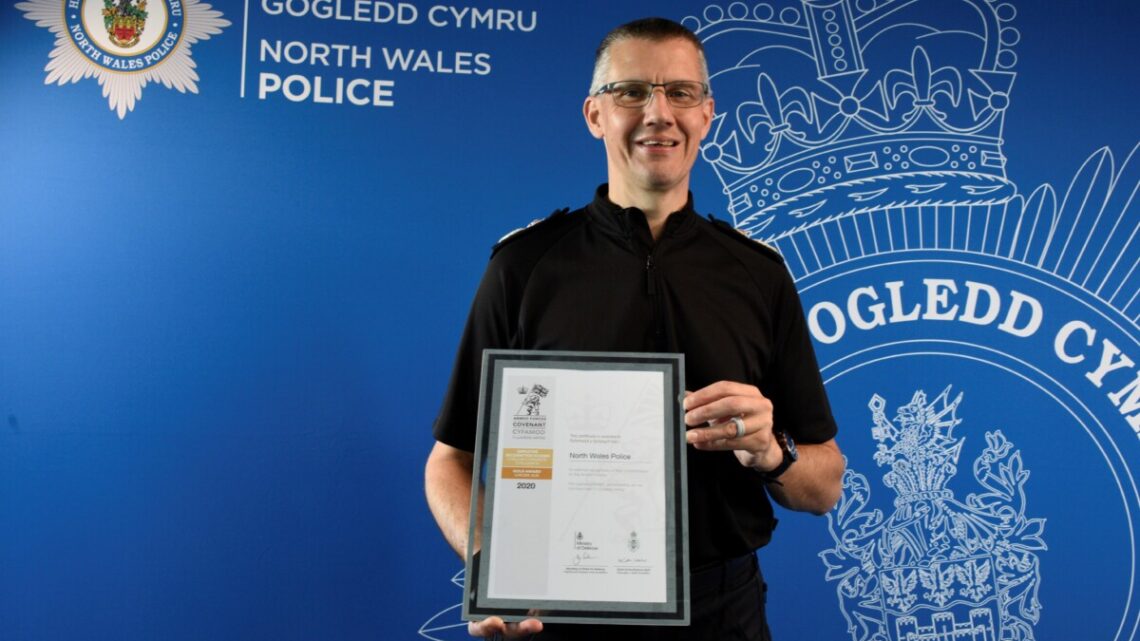 The Covenant is a promise by the nation ensuring that those who Serve or who have Served in the Armed Forces, and their families, are treated fairly. As holders of the Gold Award, North Wales Police has been rated as exemplary in its support of defence people and actively supports the MOD’s Career Transition Partnership.

The partnership strives to help ex-Servicepeople find a new civilian career or job and help employers to recruit the best. Chief Constable Carl Foulkes, who previously Served as an Aircraft Engineer in the Royal Navy, believes that North Wales provides the ideal location for defence workers to transition into police work, saying: “As a force, North Wales is proud to employ 13 Reservists, who are afforded dispensation if recalled by their respective Armed Forces in times of need. He added: “These individuals occupy a variety of operational and staff roles with North Wales Police and their transferable skills are undoubtedly a useful asset in their police work.

As an ex-Serviceperson myself, I am genuinely pleased that we have so many ex-Forces colleagues who have decided to make policing in North Wales their career.

Those who have Served their country in the Military can and do, add a huge amount of lived experience to policing and I would encourage those who are interested in joining North Wales Police to get in touch and look at the opportunities we offer.

Like the Military, the breadth of different roles and dealing with so many different circumstances, often on a daily basis, is something that makes policing so unique and incredibly interesting.”

Chief Inspector Jeff Moses, who has Served in the Army Reserve for 30 years, believes that North Wales Police has an excellent working relationship with the Armed Forces. He said: “We regularly consult and exercise with Military personnel and would actively encourage former Armed Forces personnel to join us at North Wales Police as we recognise and value the skills and mindset Veterans bring to any organisation.

The Gold Award further demonstrates our commitment to the Armed Forces Covenant, our employees and the wider commitment through establishing firm policies to show flexibility towards annual training and mobilisation commitments of Reservists among our officers and staff.

In North Wales Police we would always encourage Forces Veterans to apply to join us. For a number of years we have undertaken a lot of work in the background to support Veterans involved in the criminal justice system and we work throughout the year with many other agencies to support the Armed Forces Covenant agenda in a variety of different ways.”

Join us for a virtual Q&A on Friday 24 June at 14:00.
Questions can be sent via Facebook or Instagram in advance or join us on the day.