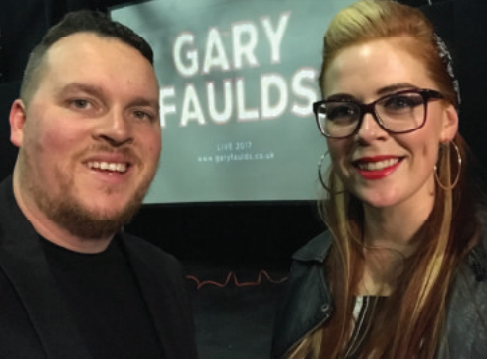 Gary left the Army in 2011 and is making a name for himself as a stand-up comedian.

I was Army Air Corps, I joined in 2004. I was a driver and ground crew for Gazelles so I drove different wagons. Actually, I did every job you could imagine – but that’s the good thing about the Army isn’t it? You multi-task – and when you arrive on Civvy Street you have the one job and it’s hard to settle because you’re used to doing three jobs!

You get a call from your Sergeant and you have to be an expert in whatever he asks you to do!

Resettlement was good. I did my off-shore stuff (for oil rigs) – but I never pursued it; I became a lorry driver.

How did you get into comedy?

After regimental exercise you have skits – every Squadron has to come up with a set to entertain the whole Regiment. For one of mine, I told jokes – I ended up naked, as you do, and having a go at the Marines… But that’s when I knew I wanted to do comedy and it was something that I wanted to pursue.

I was over in Cyprus doing a gig for the guys recently. It was nice to do a gig in front of a Military crowd, so hopefully that’s something that I can continue. I know who to pick on; just go for the RSM and the CO!

Do you miss the Forces?

I don’t think I’ve ever settled. I miss that environment with the lads, where you can rely on your mates. Civvy Street can be quite lonely. In the Army if you’ve got a problem, you speak to your mates and you get it dealt with pretty soon.

That’s what I miss, the support network and the camaraderie.

I would go back in if I could! I’m losing weight so I can look at the Reserves. It was one of those situations where I thought the grass was greener and I had to get out of the Army. You get out and you think, the Army was amazing!

What’s next for you?

I’m selling out theatres all over the country and I’m doing a DVD, which is amazing! It’s insane, I’m almost sold out for the next two years. Part of that drive and ambition is from the Military. That’s why Forces guys are good employees, because we’re willing to do anything to get the job done.

I joined the Army when I was young. I was involved in gangs and it was probably the best thing I ever did because the Army gave me values that I would never have picked up on Civvy Street.

What advice would you give to Service leavers during their resettlement?

When you go through resettlement, pick something that you know you’re going to pursue. Make sure you pick the right course for ‘you’. Ideally, something practical that’s going to make you money straight away. You don’t want to be sat there twiddling your thumbs.

What is distance learning?