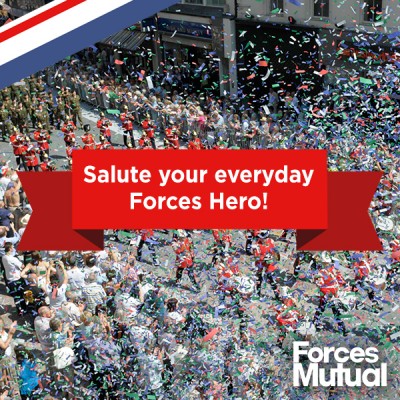 This June, Forces Mutual is inviting all UK Armed Forces members including veterans and civilian contractors to nominate someone in the Forces family who they believe has gone the extra mile and deserves recognition. Two winners – a UK Armed Forces hero and a UK Reservist hero – will each receive £500 cash.

To nominate a person on active-duty, a reservist or a family member of the Armed Forces, simply tell Forces Mutual why you believe they deserve recognition in 140 characters at https://www.forcesmutual.org/forces-community/armed-forces-day. If they win you will get £100 too.

Here is a selection of example nominations to get you thinking:

• Leah Tomlinson is my Armed Forces Hero because… she’s an incredible multi-tasker and young carer. While I’m away she juggles her studies with taking care of our mum and younger siblings

Nominations will be posted on Forces Mutual’s ‘Wall of Forces Heroes’ at https://www.forcesmutual.org/forces-community/armed-
forces-day as they are received and approved. Between 19 and 25 June you can vote for your favourite among the shortlisted nominations, and after doing so you will be entered into a £50 prize draw.

“As the financial ally of the Armed Forces, we wanted to celebrate Armed Forces Day and Reserves Day by recognising those unsung heroes across the Armed Forces family who have gone above and beyond, and are really looking forward to seeing the nominations”, says Paul Hemingway, Head of Marketing – Military, at Forces Mutual.

Reserves Day – one week to go