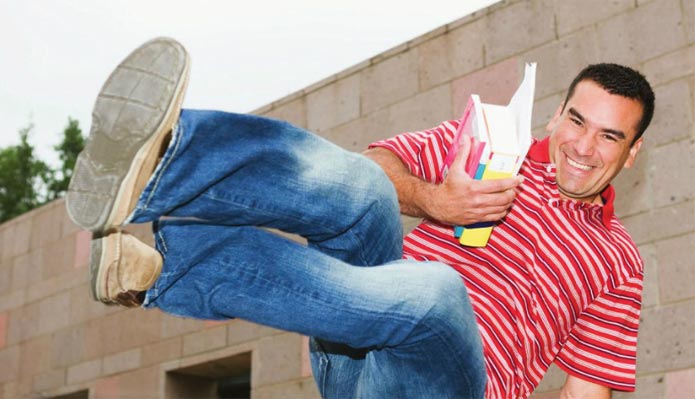 On The Campus: Getting The Most Out Of Student Life

Every university is different and that means that even students studying very similar courses at two different institutions can have very different experiences. We look at the other things you might consider when selecting a university to study with.

Whilst, it’s sensible to select a university primarily for the course you’d like to study and its reputation for excellence in a particular field, it’s not the whole story. There’s a good reason why many graduates will go a bit misty-eyed when conversation shifts towards nostalgia about the good old student days: studying at university is fun.

Clearly, as a Service-leaver, you’re likely to be a mature student and have grown out of some of the silliness that undergraduates indulge in. (Remember that for some undergraduates, going to university represents leaving home for the first time.) Anyway, a bit of tomfoolery might provide light relief every now and again.

University is a very different experience from school or even college. The set up is such that instead of plainly answering questions about maths, science, English literature and so on, the university student is to some extent, expected to use their head, go out and find a question that they then attempt to answer in a new way. This requires not only the academic training (as provided) but also some thirst for knowledge and passion for the subject.

Passion for the subject might actually lead you to seek out new non-academic experiences. Because you’ll be surrounded by other undergraduates or students with the same level of passion, it might be the case that you end up spending time with them socially. This of course, can mean a balls to the wall drinking session – or it might mean a few civilised pints (or cups of coffee) discussing aspects of the course.

Not all students or collective student bodies are the same and it’s difficult to know before you start attending a university course if this is a likely outcome. Fortunately, there might be clues found in things like the list of university societies. Societies form something of a bridge between the academic and social parts of the campus experience. Whilst there will be societies based around an appreciation of Tom and Jerry cartoons or science fiction, there might be debating societies or those based around let’s say higher culture, that may fit in with your subject matter. Some societies might sound a bit too pretentious to be taken seriously but you never know until you take a proper look and attend a meeting.

Sports play a sizeable part of campus life. This isn’t so surprising given that for the most part, your student peers are likely to be young and fit. Most universities will have several sports teams and at a lower level there will probably be football or cricket leagues played between members of different halls or subject groups.

Famously, the older, ‘red brick’ universities tend to compete at a very high level in rowing, cricket and rugby union, though more regularly these days in other sports too. If you want to play sports at a high level, this might be a good inroad since you’re likely to run into county cricketers (present or future) in the cricket set up – which might well provide players for the ‘Combined Universities’ teams that take on county sides in some competitions. The same thing happens in rugby union, in a similar way to how the Army and Navy teams are run. Of course in rowing, at the elite universities, you’re likely to be up against established international sportsmen and Olympians for selection.

Other organised fun might also be found in activities run for the RAG society. RAG societies are found on most campuses and are devoted to raising money for charity through any means possible, perhaps sponsored events or sometimes just by shaking tins. Some universities will organise a RAG parade, in a carnival spirit, through their town/city with participants collecting money from passers-by.

The location of the university you select will also have a bearing on your experiences as a student. For one thing, some locations, notably London, are more expensive than others, whilst other smaller towns might not present so many options for things to do and push you towards taking advantage of the Students’ Union, which operates on every campus, usually running the student bar facilities (and the societies). The premises may not be the coolest or smartest but they might well be the cheapest and because they are based on campus are likely to form something of a meeting point or hub for students.

Studying at university should be a holistic experience where you meet new people and try new things. Naturally, these shouldn’t distract your focus away from your studies, especially given the expense of tuition fees. Before you apply, it’s worth sending away for a prospectus that will often give you a flavour of the campus – or you could visit in person.

Your maturity and experience will probably be sufficient to keep you grounded and help you to succeed academically but a few laughs here and there certainly won’t hurt and some of the other experiences might even help to solidify all you’ve learned.

Achieve Your Ambitions & Get Your Dream Job