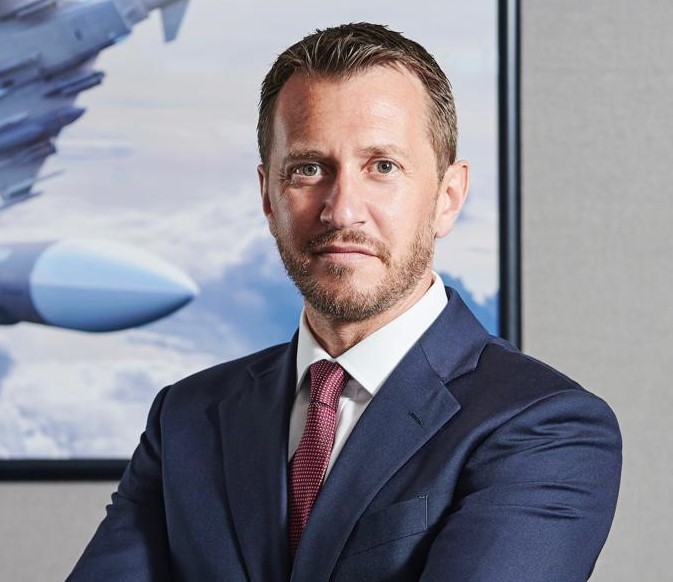 Jim joined the Royal Marines in 2000 retiring as a Major in 2008. During that time he specialised as a JTAC and TACP and was working at the leading edge of air-land integration development in the UK. He is now General Manager of MBDA Middle East, in Dubai.

I was offered a job as a Military contractor in the UAE, from there, setting up their JTAC school. It was too good to turn down. I was lucky to immediately move into a Military contractor role as it then became a good stepping stone into commercial defence roles. Hence the transition from Military to business happened gradually over two to three years for me; and I’m glad it did. It allowed me to learn a lot of the fundamentals of business within a familiar environment, with some excellent mentors.

How did you come to be involved in MBDA?

I moved to MBDA in 2014, having worked in commercial defence roles in local Abu Dhabi defence companies.

Lots of people won’t realise that you have an operation in the Middle East. Can you tell us a bit about it, please?

We have offices in Abu Dhabi, Doha, Riyadh and Dubai as well as a number of ongoing partnership discussions for bigger Middle East ventures. This footprint has to manage our support of missiles and services in region; our sales and marketing activity for new business, as well as industrial cooperation for future ventures.

Can people move directly from Military service to your Middle-East offices?

It’s not impossible, however, the common route is to have first worked for MBDA in one of our European home nations (UK, France, Italy, Germany or Spain). There is always a strong pool of internal talent looking for overseas appointments and we want people primarily who understand and have experience in the business first. The exception to this is if someone has specific Middle East experience that makes them a good fit with what we’re trying to achieve.

What are the Military skills and attributes that you turn to most in your work?

There are so many: communication, strategic outlook, leadership and planning, to name just a few. I’m a firm believer that most effective people in the business world are successful because of what they are, rather than what they know. The nuances of business (whether you’re in a company that deals with goods or services) take some time to learn; but that’s no different to moving between many jobs in the Military where there are steep learning curves.

We are a defence company and Europe’s largest missile manufacturer, working in air, land and sea domains, so there is an immediate link with Service-leavers. They understand our products and the user requirements for them. We are an engineering company so tri-Service engineers have a lot to offer. We also have opportunities for Military advisors, programme managers, salespeople and many others. We have a strong bond with UK MOD and we are fully committed to the
Military Covenant.

MBDA is a superb place to work. We were ranked 11th in the 2019 Sunday Times Top 25 Big Companies to work for. More importantly though, we were the top ranked engineering company and the only defence company on the list.

What’s your best advice for Serviceleavers?

Start by finding an industry that you think you can really enjoy working in and have some longevity in. After that, it’s important to get in the door even if the initial role is not your dream job. This is especially true if working for a large company. With smaller organisations, you might have more flexibility, but in large companies, you need to be in the door and proving that the skills and personal qualities you have learned in the Military are relevant.

Join A Company Where You Will Want To Stay – MBDA