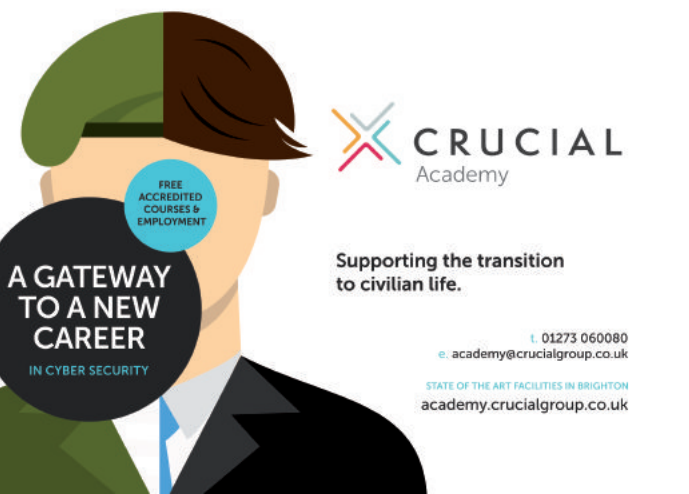 Crucial Academy – A Gateway to a New Career

Crucial Academy help support the transition to civilian life. In an effort to address the growing skills gap in the cybersecurity industry, a team of former Royal Marines Commandos have launched a business providing free cybersecurity training, accredited qualifications and careers for ex-Service personnel looking for a path back to civilian life while maintaining their roles as security defenders.

Course developers have already made a successful transition to notable cybersecurity companies and financial technology companies, and they bring that wealth of experience to their offerings at Crucial Academy at its state-of-the-art training facility in Brighton. In order to take the courses, candidates must first undergo a rigorous selection process that assures they are the proper match for the pathway.

Crucial Group’s chief executive and former Royal Marine Commando, Neil Williams said: “People who have spent time in the Forces have an incredible work ethic, resilience and a security-driven mindset that makes them well suited to a career in cybersecurity,” adding: “We’re pleased to be able to help give them a pathway into a successful career – and in a sector where they can make such a difference.”

After successful completion of the training, qualified Crucial Academy candidates are introduced to a cybersecurity career with one of the academy’s commercial partners. The Academy has had several successful graduates that have begun their careers at top employers including: Grant Thornton, KPMG and QinetiQ. According to a 2016 skills gap analysis from ISACA, there will be an estimated global shortage of two million cyber-security professionals by 2019.

State of the Art Facilities in Brighton

Look no further than Persimmon Homes and Help to Buy