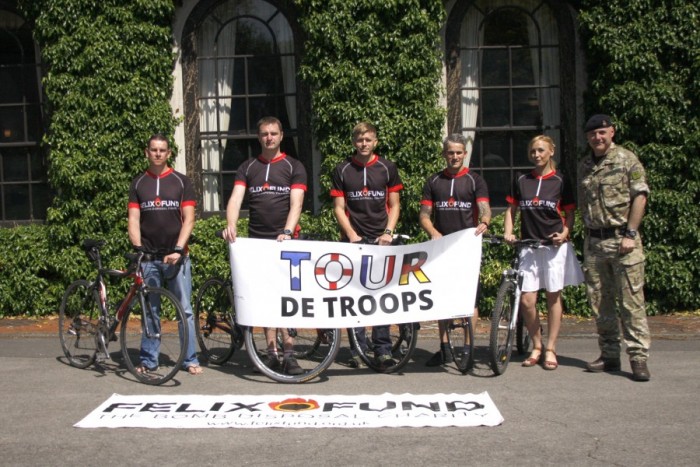 Twenty bomb disposal experts from the British Army are preparing to cover 1,500 miles by bike to raise funds for Felix Fund – the charity for those affected by Explosive Ordnance Disposal (EOD).

Switching blast suits for Lycra, the cyclists will begin their ride from Edinburgh to Bielefeld in Germany on June 12th and average about 100 miles per day. In just 15 days, they will visit every security-cleared EOD regiment in the first-ever Tour de Troops.

Key funding has been provided for the event by Kirintec, who specialise in the design and production of security technology solutions. Major opportunities are still available, however, to sponsor each stage and to be featured on the team’s cycling clothing and equipment.

The tour’s route traverses through England before crossing into to northern France. Along the way, the cyclists will pass through the towns and cities close to their military bases, with some special guests likely to feature along the way.

After 15 days on the road, meeting the Bielefeld Troop will mark the end of an exhausting journey. No stranger to that feeling of reaching the body’s physical limits, however, is one of Felix Fund’s greatest heroes and Tour de Troops rider, Captain James Wadsworth.

Capt. Wadsworth, who was awarded the Conspicuous Gallantry Cross (CGC) for bravery in Iraq, has raised thousands of pounds for the charity. Most recently he completed the unforgiving Marathon des Sables (over 156 miles across the Saharan Desert) to raise £1,206 for the cause.

Capt. Wadsworth, known as ‘Waddie’, said: “The Tour de Troops is going to hurt. It’s going to hurt a lot. But in my experience, I know pain can be beaten and that together we can achieve something incredible. This event is to raise money and further awareness of Felix Fund’s amazing work both across the UK and beyond.”

Felix Fund’s money supports people like Clive Smith, who will also be riding in the event. Clive lost both of his legs in an explosion during a tour of Afghanistan. A grant made by the Felix Fund in 2016 meant Clive could travel to Australia for pioneering surgery, which enabled him to walk with prosthetics.

The charity’s activities also focus on providing mental health support. Having played a significant part in the care of over 100 EOD teams returning from the Afghanistan conflict, the charity now offers Dashboard Courses on mindfulness: building awareness of the warning signs linked to mental health problems and sharing coping techniques.

Melanie Moughton, Chief Executive Officer at Felix Fund, said: “We can’t overstate the strength of this cycling team and the significance of this tour to our charity. They’re all people of exceptional ability and courage who, I hope, will receive the full support of the public as they pass through towns and cities along the way.”

Every member of the Tour de Troops team belongs to the 11 EOD Regiment RLC (Royal Logistic Corps). They’re hoping for a lot of support on their journey and would love for people to donate generously by visiting their JustGiving page:https://www.justgiving.com/fundraising/Tourdestroops.

The Tour de Troops breaks down into 11 key stages:

Day 6 – Ashchurch to Tidworth (via Didcot)

Day 8 – Aldershot to Colchester (via Northolt)

The charity meets its charitable objectives by: