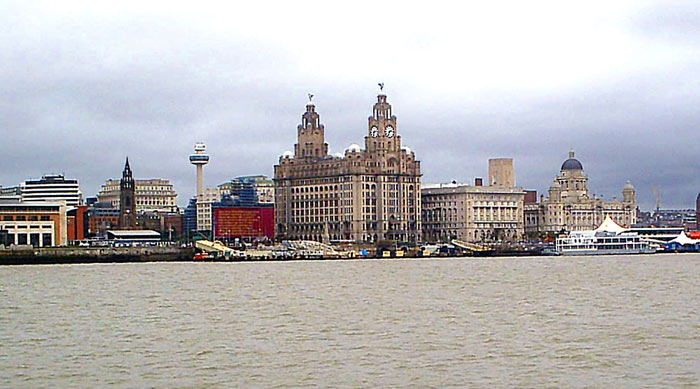 Liverpool is romanticised as a cultural hub where the port not only sent and received untold amounts of freight but also made the area a cosmopolitan melting pot. Whilst parts of that are true, Liverpool has previously struggled to overcome economic troughs but is now certainly building towards a bright future.

Incredibly, the area appears to be harking back to its routes and will this year see the phased opening of ‘Liverpool2’, promoted as the UK’s most central deep water container terminal. Because the port will now be able to accommodate 95% of global container vessels it will naturally become a hub for global services into and out of the UK. (Liverpool is at the heart of the UK, with 35 million consumers within 150 miles of the port) The fact that Liverpool2 will be the one of the most operationally efficient and modern terminals in northern Europe capable of handling two 380m  mega post-panamax vessels simultaneously is important, as the port will not only affect sea-born trade but spawn massive opportunities for logistics businesses in the north of England.

Indeed, much of the infrastructure is already in place. The Mersey was not selected as the site for the new ‘super port’ on a whim. The 70 mile radius around Liverpool has the largest volume and density of large warehousing (over 9,000 sqm) of any region, encapsulating more than 28% of the UK’s large warehousing. Liverpool also has excellent connections, with 10 motorways within 10 miles of Liverpool2 and 10 rail linked terminals.

Merseyside also has a thriving digital service industry and as recently as January this year the Liverpool Echo newspaper reported that BT was expanding its UK call centre operations; a move that could give the area a windfall of 1,000 new jobs by 2017. BT is among several call centres based in the region and already employs more than 2,500 people.

Professional services is not a new sector in Liverpool by any stretch. Naturally as an area with a rich history of import and export trade, brokers of all manner have been operating in the area for generations.

Banking is the most significant professional activity in the area by scale and associated businesses involved with asset and wealth management are also well established, making Liverpool the most important English location outside of London for this specialist activity. Companies based in the City Region include Pershing, TATA Consultancy Services, Arvato, Bank of New York, Ernst and Young, KMPG, Royal Sun Alliance, Rathbones, Barlaycard, Santander, and Deutsche Bank. (Pension and life assurance administration and management is also a significant employer.)

Although the organisations tend to be city based there are outlying clusters in nearby Sefton and Wirral, Southport, Bootle and Birkenhead. (The combined sector employs 80,000 people in 2,500 businesses in the region.)

A diverse mix of companies including Jaguar Land Rover, Unilever, Pilkington, Ineos and Astra Zeneca alongside Getrag, Johnson Controls, ABB as well as innovative SME’s, engineering and fabrication companies and manufacturing start-ups now have operations on Merseyside. Such is the value of manufacturing to the area that a Manufacturing Action Plan has been developed in consultation with partners across the City Region to ensure a cohesive approach to strengthening, promoting and growing the advanced manufacturing sector in the City Region.

Along with Manchester and North Cheshire, Merseyside forms one of three main concentrations of life science clusters in the UK.

In fact the region has some standing in Europe as a leading bio-manufacturing cluster with major companies such as Eli Lilly, Actavis, Astra Zeneca and Novartis alongside a rapidly expanding biotechnology community as well as healthcare companies and a strong analytical and clinical supply presence.

The strong reputation based on life sciences, biomedical and medical research with sophisticated facilities in genomics and personalised medicine is concentrated on the four universities in the area which provide a world-class venue and supply expertise, including the UK’s first University Technical College (UTC) specialising in life sciences.

The region is home to seven NHS trusts and more specialist hospitals and health centres than any other UK city outside London.

As previously mentioned, being a major port means that Liverpool has absorbed a multitude of cultural links from around the world. The 2008 European Capital of Culture, also includes the Liverpool Maritime Mercantile City, a UNESCO designated World Heritage Site.

Liverpool has more listed buildings, registered historic parks, museums and art galleries than any other city in the UK outside London. The home of two Premier League football clubs, Liverpool and Everton and with plenty of musical, maritime and literary heritage it isn’t really that surprising to find that it’s the UK’s sixth most popular city for domestic visitors. According to the Liverpool City Region Local Enterprise Partnership, the visitor economy is worth £3.8bn and supports over 49,000 jobs.

In February the London Stock Exchange named four Liverpool companies in its list of ‘1,000 Companies to Inspire Britain’ report.

They include RS Clare, a specialist manufacturer which has been in the city for more than two centuries; construction specialist, Curtins Group; A&B Engineering (electrical service division); and financial services business, Wealth at Work Holdings. Collectively, the quartet is growing at an average annual rate of 28%.

Liverpool is a city famed for its traditional commercial activities based around the port infrastructure. Recently, however, the city has begun to show signs of developing new ways of thinking and green shoots of entrepreneurialism have started to emerge. Liverpool is becoming known as a hotbed of start-up businesses.

Santander opened its first business incubator in the city during 2014 and the Chambers of Commerce has since introduced an accelerator programme, SparkUp. Launch22 has also opened its first incubator outside of London in Liverpool.

Although Liverpool has many determined entrepreneurs, historically it has always relied heavily on large employers which has meant a proportionally small number of start-ups. (This reliance devastated the city when many of its successful banking, industrial, and maritime companies moved away.) In their 2011 report, Lord Heseltine and Sir Terry Leahy – ex-chief executive of Tesco and a Liverpudlian – argued that local businesses at the time were in “slower growing sectors”. That meant that “they did not pick up the slack” when the bigger ones left.

Birkenhead is known as a centre for ship building and as a seaport.

Glass producer Pilkington has been in the town since 1826 and is the town’s one remaining large industrial employer.

Runcorn has close links to the motorway system and has seen huge development of warehousing and distribution centres. Even though other industries have dwindled over the years, chemical manufacturing still exists in the area.

Widnes has also been linked with the chemical industry since 1847. Chemical manufacture continues there today.

The Omega Development Site close to the M62 on the northern edge of Warrington is a major business park to be developed in stages over the next 30 years. The site for this is the 575 acres (2.33 km2) of space on the former Burtonwood Airbase.